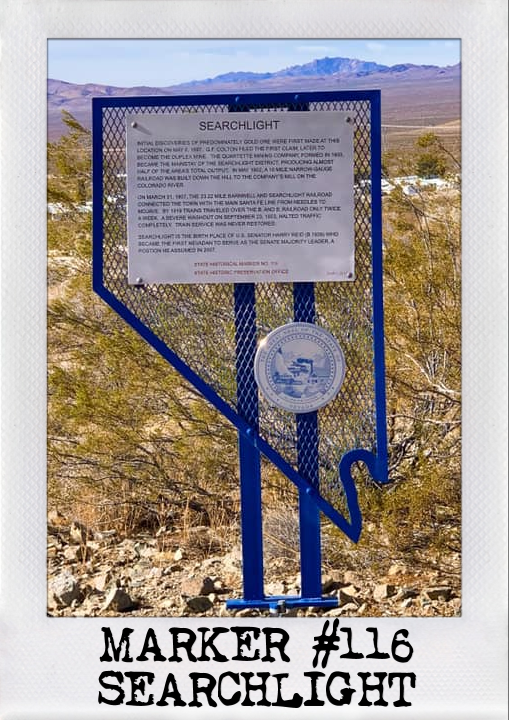 location: Off Route 95 in Searchlight. If coming from Vegas, it will be on the passenger side shortly after passing the church before you hit the main town area.
Initial discoveries of predominately gold ore were first made at this location on May 6, 1897. G.F. Colton filed the first claim, later to become the Duplex Mine. The Quartette Mining Company, formed in 1900, became the mainstay of the Searchlight district, producing almost half of the area’s total output. In May 1902, a 16 mile narrow-gauge railroad was built down the hill to the company’s mill on the Colorado River.
On March 31, 1907, the 23.22 mile Barnwell and Searchlight Railroad connected the town with the then main Santa Fe line from Needles to Mojave. By 1919 trains travelled over the B. and S. Railroad only twice a week. A severe washout on September 23, 1923, halted traffic completely. Train service was never restored.
Searchlight is the birthplace of U.S. Senator Harry Reid (b.1939) who became the first Nevadan to serve as the Senate Majority Leader, a position he assumed in 2007.

personal note: There was not a lot of room to park off to the side to see this one. I had to park on the opposite side of the road and dash across. Please be safe. Those mountains in the back to the right are stunning...~