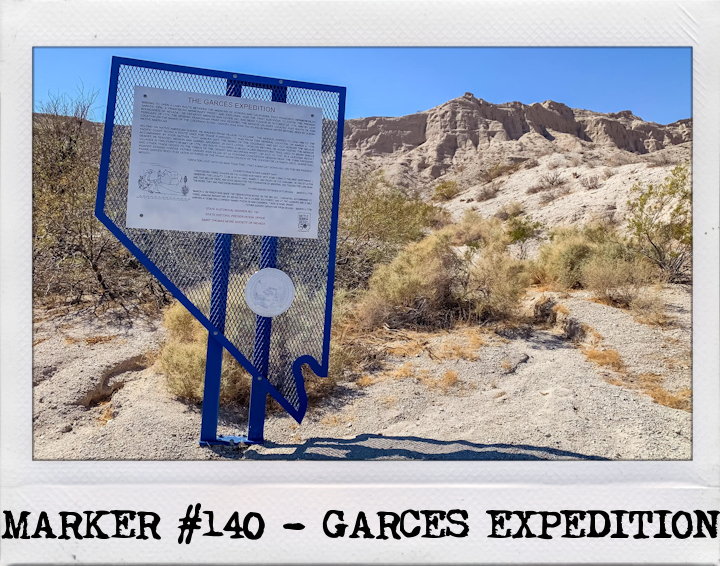 location: Off the Needles Highway in Laughlin (near 35.10674,-114.65076)
Seeking to open a land route between the missions of Sonora and California, Fray Francisco Hermenegildo Garcés, OFM, a Franciscan missionary priest and explorer, was the first European to enter the present boundaries of Nevada. He departed mission San Xavier Del Bac near Tucson in October of 1775, and by late February of 1776, the Spanish Franciscan friar had reached the Mohave villages located just south of this location on the banks of the Colorado river. Garcés was now traveling in areas never before seen by a non-native American.

Relying on Native American guides, he walked from village to village. The Mohave agreed to lead him to the pacific coast along a route used for trade purposes. It was from this general location, on March 4, 1776, accompanied by four natives, that Garcés left the banks of the Colorado and set out across the Mojave Desert; he reached Mission San Gabriel Arcángel 20 days later. Upon his return, he again visited the Mohave villages in this vicinity in May of 1776. His route followed a much older prehistoric trail used to bring shells and other trade goods to the tribes of the desert and mountain west. On July 19, 1781, in a Quechan revolt against Spanish forces, Father Garcés was killed at La Purisima Concepción Mission near the Yuma crossing. Padre Garcés’ body was later interred in the Franciscan church of the Colegio De La Santa Cruz, Querétaro, Mexico.

“Greater love hath no man than this - that a man lay down his life for his friends.”

“I proceeded three leagues on the course northwest with some turns to the west-northwest. I observed this locality to be in 35° 01', and I named it San Pedro De Los Jamajabs. In this situation and that below there are good mesas for the foundation of missions, and though they are near the river, they are free from inundation”.
Father Garcés’ Entrance into Nevada (March 3, 1776)

“March 4, on which was made the observation noted on the 3rd day. I departed, accompanied by three Jamajab Indians and by Sevastian, on a course southwest, and at two leagues and a half arrived at some wells [which I named Pozos De San Casimiro]. There is some grass”.
Father Garcés’ Departure from Nevada (March 4, 1776)