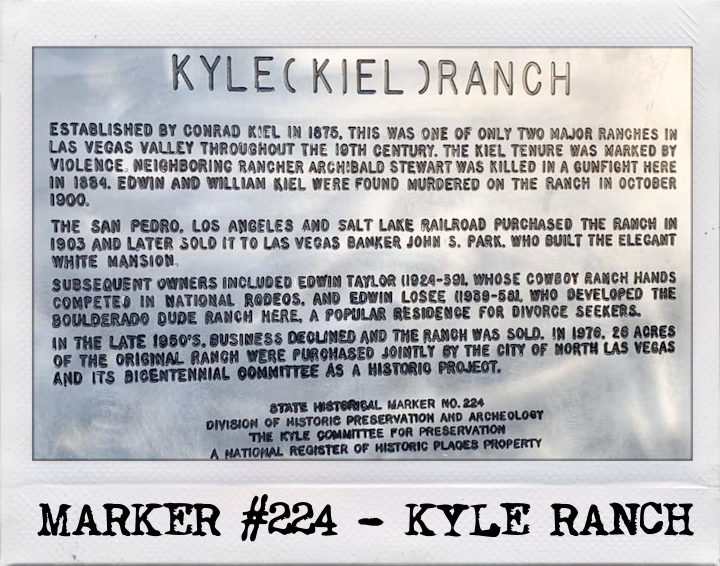 location: inside Kiel Ranch off W Carey Ave & Kiel Way, Las Vegas
Established by Conrad Kiel in 1875, this was one of the only two major ranches in Las Vegas Valley throughout the 19th century. The Kiel tenure was marked by violence. Neighboring rancher Archibald Stewart was killed in a gunfight here in 1884. Edwin and William Kiel were found murdered on the ranch in October 1900.
The San Pedro, Los Angeles and Salt Lake Railroad purchased the ranch in 1903 and later sold it to Las Vegas banker John S. Park, who built the elegant white mansion. Subsequent owners included Edwin Taylor (1924-39), whose cowboy ranch hands competed in national rodeos, and Edwin Losee (1939-58), who developed the Boulderado Dude Ranch here, a popular residence for divorce seekers.
In the late 1950's, business declined and the ranch was sold. In 1976, 26 acres of the original ranch were purchased jointly by the City of North Las Vegas and its Bicentennial Committee as a historic project.

personal note: Some point between 2009 and Feb 2021, this marker lost its blue Nevada shape and just became a plaque on the gate of the park. A fire in 1992 destroyed the main building. The city then sold off all but 7 acres of this historic park. It was used as a dump site, losing its value as an archeological site. When I visited last week, the park was a disaster. There are giant cut branches everywhere. Couldn’t even see the spring. Las Vegas fails at preserving history once again.