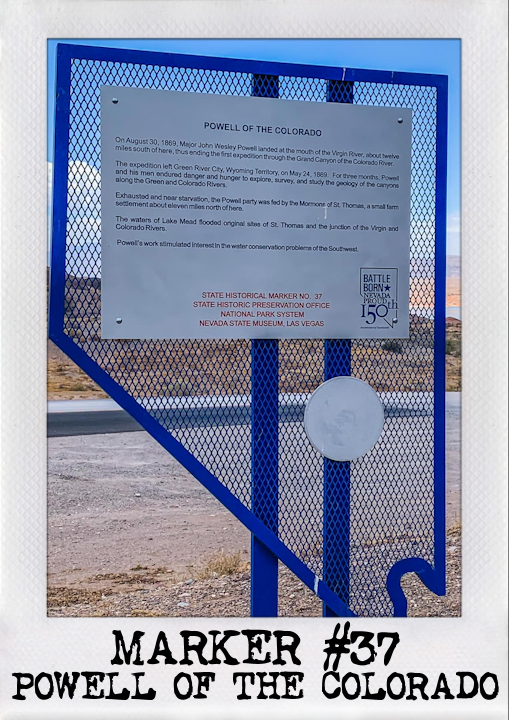 location: Echo Bay
On August 30, 1869, Major John Wesley Powell landed at the mouth of the Virgin River, about 12 miles south of here, thus ending the first boat expedition through the Grand Canyon of the Colorado River.
The expedition left Green River City, Wyoming Territory, on May 24, 1869. For three months Powell and his men endured danger and hunger to explore, survey and study the geology of the canyons along the Green and Colorado Rivers.
Exhausted and near starvation, the Powell party was warmly greeted and fed by the hardy Mormon pioneers of St. Thomas, a small farm settlement about 11 miles north of here.
The original sites of St. Thomas and the junction of the Virgin and Colorado Rivers are now beneath the waters of Lake Mead. This, and later Powell surveys, stimulated great interest in the water conservation problems of the Southwest.

personal note: The text on the signage must be really old because St. Thomas has been uncovered for quite some time. I tried to visit it on this same trip, but the road was a wash-board and we turned around after a long day. This site made me think a lot about the drought and how much fun these spots along the river must of been in their hey-day. Fun fact: Ebay is said to be named for Echo Bay