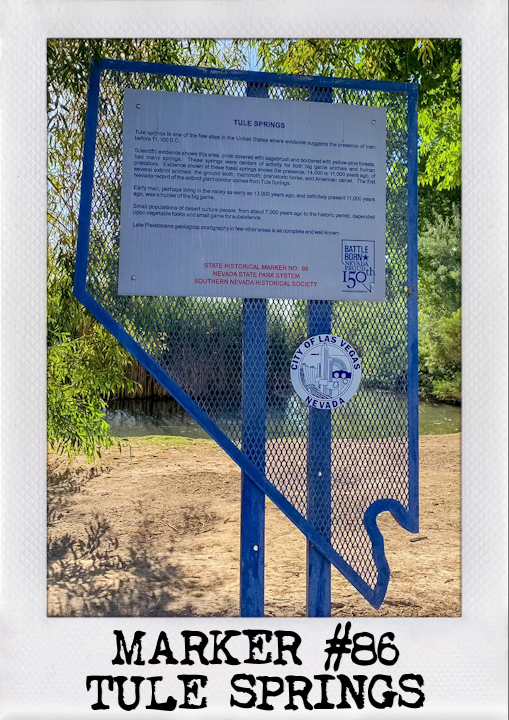 location: Near one of the ponds at Tule Springs
Tule Springs is one of the few sites in the U.S. where evidence suggest the presence of man before 11,000 B.C.
Scientific evidence shows this area, once covered with sagebrush and bordered with yellow-pine forests, had many springs. These springs were centers of activity for both big game animals and human predators. Evidence found at these fossil springs shows the presence, 14,000 to 11,000 years ago, of several extinct animals--the ground sloth, mammoth, prehistoric horse and American camel. The first Nevada record of the extinct giant condor comes from Tule Springs.
Early man, perhaps living in the valley as early as 13,000 years ago and definitely present 11,000 years ago, was a hunter of the big game. Small populations of Desert Culture people, about 7,000 years ago to the historic period, depended upon vegetable foods and small game for subsistence.
Late Pleistocene geological stratigraphy in few other areas is as complete and well known

personal note: This is one of my favorite parks in the Las Vegas area. It is absolutely gorgeous in the autumn when the leaves have started to turn yellow and collect among the desert floor.