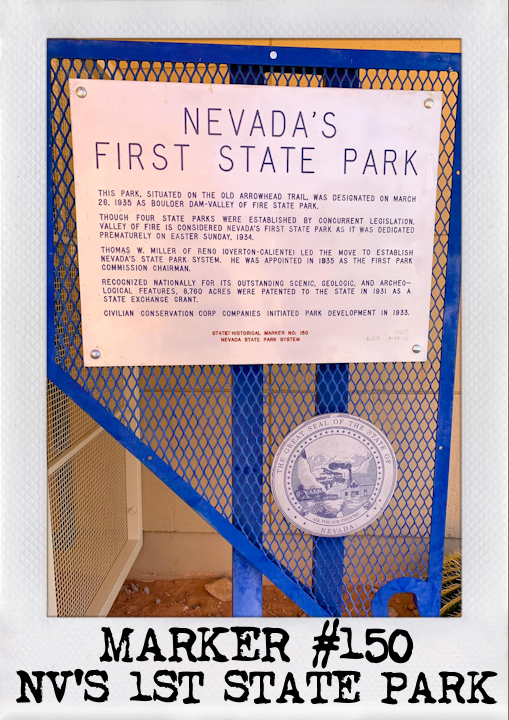 location: Outside the visitor center at Valley of Fire
This park, situated on the old Arrowhead Trail, was designated on March 26th 1935, as Boulder Dam-Valley of Fire State Park. Though four state parks were established by concurrent legislation, Valley of Fire is considered Nevada's first state park as it was dedicated prematurely on Easter Sunday, 1934.
Thomas W. Miller of Reno (Overton-Caliente) led the move to establish Nevada's state park system. He was appointed in 1935 as the first park commission chairman.
Recognized nationally for it's outstanding scenic, geologic, and archeological features, 8,760 acres were patented to the state in 1931 as a state exchange grant.
Civilian conservation corp companies initiated park devlopment in 1933.

personal note: This was my first visit to Valley of Fire even though I have lived in the state for almost a decade. It is not to be skipped out on. It was too hot (FOR ME) to do any hiking so I can't wait to return when its cooler outside. I did get to see the petroglyphs at Atlatl Rock. Mouse's Tank Road provides amazing r/RoadPorn if you're into that kind of thing. I don't judge ;)