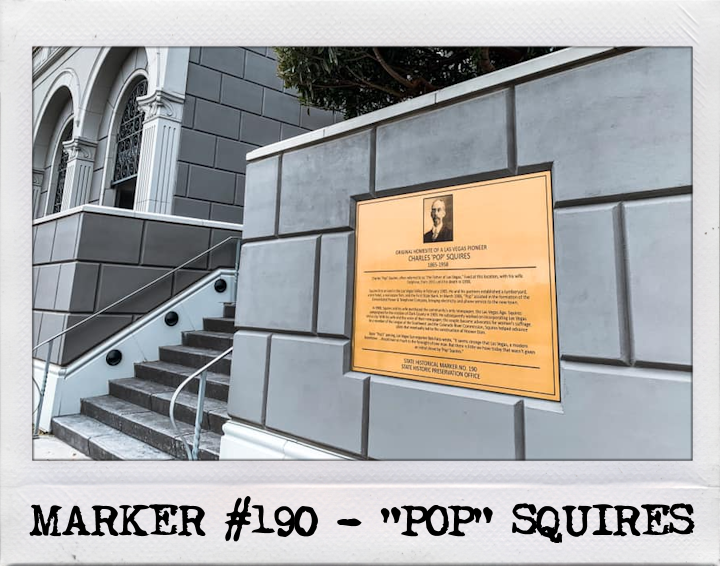 location: 7th & Stanley W Cooper, Las Vegas
Charles “Pop” Squires, often referred to as “the Father of Las Vegas,” lived at this location, with his wife Delphine, from 1931 until his death in 1958.
Squires first arrived in the Las Vegas Valley in February 1905. He and his partners established a lumberyard, a tent hotel, a real estate firm, and the First State Bank. In March 1906, “Pop” assisted in the formation of the Consolidated Power & Telephone Company, bringing electricity and phone service to the new town.
In 1908, Squires and his wife purchased the community’s only newspaper, the Las Vegas Age. Squires campaigned for the creation of Clark County in 1909. He subsequently worked on incorporating Las Vegas into a city. With his wife and the voice of their newspaper, the couple became advocates for women’s suffrage. As a member of the League of the Southwest and the Colorado River Commission, Squires helped advance plans that eventually led to the construction of Hoover Dam.
Upon “Pop’s” passing, Las Vegas Sun reporter Bob Faiss wrote, “It seems strange that Las Vegas, a modern boomtown … should owe so much to the foresight of one man. But there is little we have today that wasn’t given an initial shove by ‘Pop’ Squires.”